Welcome to the official Irving Layton website maintained by his Estate 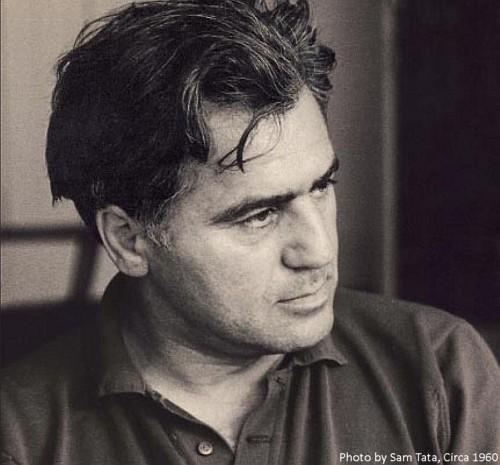 Irving Layton (Israel Pincu Lazarovitch) was born March 12, 1912, in the Romanian town of Târgu Neamț. According to legend, Layton was born circumcised, an event which the local Jewish community took to be a sign of the Messiah.

Having sent their eldest son, Abraham, to New York, where he worked for ten years saving boat passage for his parents, Moses and Keine, and seven siblings, the Lazarovitch family migrated to Montreal in 1913. Living in a cockroach-infested tenement on St. Elizabeth St. (part of the St. Urbain St. ‘ghetto’), Layton grew up struggling not only with poverty but also with anti-Semitism.

“Issie” gained a reputation for fearlessness in the face of street-gang attacks, and soon came to be called “Nappy” (short for Napoleon). Given that his mother tongue was Yiddish, it is remarkable that Layton would later become one of Canada’s most accomplished English poets.

The break with Jewish tradition came, arguably, when Layton turned thirteen and refused to go through with his bar mitzvah. Kicked out of the house (but secretly supported by his mother and his older sister, Gertrude) Layton enrolled in Baron Byng High School where he would be changed forever.

Layton recalls Mr. Saunders, his tenth grade English teacher, reading Tennyson’s ballad “The Revenge”: “I’d never heard the English language so beautifully read, so powerfully rendered, and I remember sitting quietly in my seat and listening enraptured as the sounds filled the room…”

An omnivorous reader, Layton’s thirst for knowledge led him to explore the political and philosophical thought of Marx and Nietzsche. Joining the Young People’s Socialist League in 1929, he had fierce debates with budding politicians such as David Lewis and poets such as A. M. Klein.

In part because of the anti-Semitism of one of his teachers and in part because of his “radical” ideas, Layton was expelled from Baron Byng in his senior year. Tutored by A.M. Klein and financially supported by Gertrude’s son, Bill Goodwin, who would remain a life-long friend, Layton passed the final exams.

However, despite his graduation, there was a quota on Jews admitted to McGill University. Luckily, there was a loophole: Students who graduated from MacDonald College (McGill’s agricultural affiliate) were eligible to do post-graduate work at McGill. What Layton wanted was an M.A. in Political Science. That is why, though it seems to make no sense, he enrolled at MacDonald in 1934 and received a Bachelor of Science degree in Animal Husbandry in 1939.

To put these formative years in context, one must remember that, born in 1912, Layton turned 21 in 1933 – in the depths of the Great Depression. It was bad enough that he was Jewish and without marketable skills, but articles he wrote for the student newspaper brought Layton’s political opinions into public view and aroused suspicion that he was a communist. In fact, some articles aroused so much suspicion that Layton was blacklisted from entering the U.S.A. for more than twenty years.

To make matters worse, Layton founded the “Social Research Club” which served as a forum for left-wing views and featured such speakers as Dr. Norman Bethune. After years of arguing the pros and cons of socialism and communism in places like Horn’s Cafeteria in Montreal, Layton’s debating skills were formidable. So it should not be surprising that, in 1935, Layton and a schoolmate took on the Oxford-Cambridge debating team and won.

Layton’s speaking skills came to be his trademark and would later draw nationwide television audiences on CBC’s “Fighting Words”.

In 1936 Layton met Faye Lynch, whom he would marry in 1938. After his graduation from MacDonald College, Faye and Irving moved to Halifax where Layton worked odd jobs, including a stint as a Fuller Brush Man.

Realizing that he had married a woman he did not love, Layton returned to Montreal where he found a part-time job teaching English to recent immigrants at the Montreal Jewish Public Library. Indecisive about his future and enraged by Hitler’s march across Europe, Layton enlisted in the Canadian army in 1942.

It was while on leave from his military posting in Petawawa that Layton met Betty Sutherland, an accomplished painter (and later poet). Layton would eventually divorce Faye and marry Betty and their union would produce Layton’s first two children: Max Reuben in 1946, and Naomi Parker in 1950. Together with her brother, John Sutherland, Betty had begun an artist’s co-operative which published an avant-garde literary magazine called First Statement.

In 1943, honourably discharged from the army, Layton joined the co-operative and became an editor of First Statement Press. The first book published by the press was Layton’s Here And Now in 1945.

Later that year, First Statement and another magazine called Preview united as Northern Review. Among Preview’s editors were F. R. Scott, P. K. Page, A. M. Klein, and Patrick Anderson and now, with younger poets like Layton, Sutherland, Louis Dudek, Raymond Souster, and others, they were a formidable movement at odds with Canada’s literary traditions. The younger group was adamant that poetry must express social realities in order to remain relevant, and that Canadian poets must forge their own identity rather than look to England for inspiration.

Despite disdain for all things British within their circle, it was Betty who introduced Layton to British poets like Auden, Yeats, and Eliot, and to one of Layton’s favourite writers, D. H. Lawrence, whose embrace of sexuality would become a hallmark of Layton’s own work.

Although he had been writing poems for more than a decade, it was not until 1944 that Layton wrote his first major poem, “The Swimmer”. Running into Child’s Restaurant on St. Catherine St. in Montreal, Layton grabbed the waitress’s pen and scribbled the poem on a napkin at a frenzied pace. For Layton, writing “The Swimmer” proved to be a pivotal moment, for it was only then that he knew he was truly a poet and understood his destiny.

Having finally earned his M.A. in Political Science in 1946, Layton began teaching at the Jewish parochial high school, Herzliah. A charismatic teacher, Layton had found the vocation he would continue in for the greater part of his life: as a lecturer at Sir George Williams (now Concordia) University, as a tenured professor at York University in the 1970s, and as poet-in-residence at the University of Guelph and the University of Toronto while, in addition, delivering countless lectures and readings throughout Canada.

By the mid-1950s, Layton was more prolific than at any other time in his career, sometimes publishing two books in the same year, but it was McClelland & Stewart’s publication of A Red Carpet for the Sun, in 1959, that marked the first time that Layton’s work had been brought out by a major Canadian publishing house. This was also the book for which Layton became the first recipient of the newly created Governor General’s Award for Literature.

Meanwhile, Layton had met Aviva Cantor, who had arrived in Montreal from Australia in 1955. Although Betty and Layton were still married, Layton moved in with Aviva, taking Max with him.

Shortly afterwards, in 1960, Betty moved to California with Naomi while Max stayed with his father and Aviva until moving out at the age of sixteen. Having changed her name to Boschka, Betty continued to correspond with Layton until her death in 1984.

In 1964, Aviva gave birth to Layton’s second son, David. While Aviva and Layton’s “marriage” was often stormy, they lived together for almost 22 years; the longest relationship in Layton’s life.

A few years later Layton hired Anna Pottier as his housekeeper. Anna provided much needed female companionship to Layton in the years before Alzheimer’s began to take its toll on his prodigious memory and mind. The last woman in Layton’s life, Anna left him in 1995.

No longer able to care for himself or live on his own, Layton spent his last years at Maimonides Geriatric Centre in Montreal. He died, at the age of 93, on January 4, 2006.

Surprisingly, given his reputation for self-assertion, Layton’s last will and testament required that his ashes be scattered anonymously around a tree. He wanted neither burial site nor monument. It follows, therefore, that his monument is his books and his final resting place is in his poems.